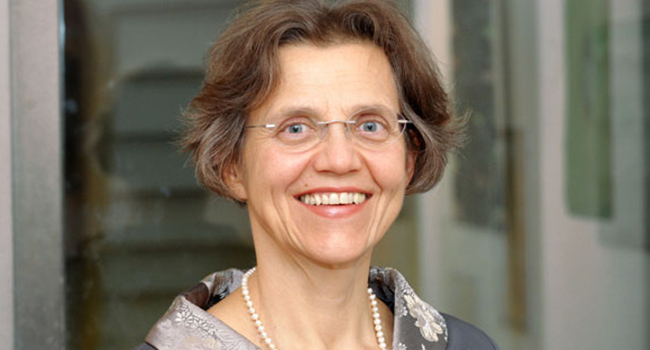 Professor Verena Winiwarter from the University of Natural Resources and Life Sciences in Vienna is awarded an honorary doctorate at the Faculty of Social Sciences, Aalborg University.

In connection with Aalborg University’s annual celebration on 3 May, Professor Verena Winiwarter from the University of Natural Resources and Life Sciences in Vienna is awarded an honorary doctorate at the Faculty of Social Sciences, Aalborg University. With this, Professor Winiwarter is acknowledged for being a leading global figure, who has worked creatively and persistently on promoting environmental history. Pro-dean for Research Søren Kristiansen says:

‘We’re very proud that Professor Verena Winiwarter, who is one of the world’s leading researchers of environmental history, has agreed to receive an honorary doctorate at the Faculty of Social Sciences. With her groundbreaking research in human-nature relationships, she has contributed to bridging the gap between natural sciences, social sciences and the humanities. And with her great contribution to interdisciplinary research in areas such as climate change, biodiversity and the use of natural resources, Winiwarter will contribute to strengthening the Faculty of Social Sciences’ focus on Global Change Research.’

During the past 30 years, the newly appointed honorary doctor has published more than 200 peer-reviewed publications with research results in numerous subjects including historical agricultural development in pre-modern society and socio-ecological method development for promoting interdisciplinary research. In recent years, she has furthermore published research on the history of the Danube River, where Winiwarter’s research team mapped how societies alongside the river adapted to the multi-centennial vagaries of the river until the early 19th century.

Winiwarter’s research often requires interdisciplinary teamwork. Through the years, she has published her research together with well above hundreds of different co-authors in various journals ranging from Science to Water History. This includes Winiwarter’s first major research field, namely medieval agriculture. With a background as chemical engineer, she has been able to interpret and analyse pre-modern societies and their knowledge on nutrient turnover and the depletion of soils of the past.

Resolving interdisciplinary challenges as an independent research field has furthermore taken up a lot of Winiwarter’s time. Together with a number of colleagues from the Institute of Social Ecology in Vienna, she has made significant contributions to understanding human-nature relationships over time as a social science research field. Focus is on assessing and measuring the material exchange between humans and nature, for instance in waste management and agriculture. Most recently, she has emphasised the importance of social science and humanities’ input to climate change research.

Winiwarter’s book with R. Bork, Geschichte unserer Umwelt Sechzig Reisen durch die Zeit was selected ‘Academic Book of the Year’ in both Austria and Germany in 2015, and the same year, she was voted ‘Researcher of the Year’. In 2016, she became a member of the Austrian Academy of Sciences.

Fights for scholarship from the Global South

Professor Verena Winiwarter was the central figure in the establishment of the European Society for Environmental History (ESEH) in 2000. ESEH became a success and now has more than 1000 members. Later, Winiwarter engaged in the establishing of a global forum for environmental history. The forum was named the International Consortium for Environmental History Organizations (ICEHO), where Winiwarter is now President for more than 30 organisations from all continents, representing more than 4000 researchers worldwide.

Promoting interdisciplinary collaboration is difficult in its own right. On top of that, Winiwarter has persistently fought for researchers from underprivileged backgrounds to excel on the international stage. She is also concerned about ensuring that young researchers’ ideas are heard at international conferences, and she has worked actively on diminishing gender-based differences in peer-review processes. Finally, she has been a creative force in establishing the Women’s Environmental History Network.

Associate Professor of Environment History Bo Poulsen states: ‘In the history environment at Aalborg University, we are proud and grateful to be a node in Verena Winiwarter’s network, both in the context of the research groups CHI and CEPS, and in connection with teaching activities, where she has been a visiting professor several times. She is also part of the international advisory group for our own interdisciplinary project Ethics and Energy, funded by the Independent Research Fund Denmark.’