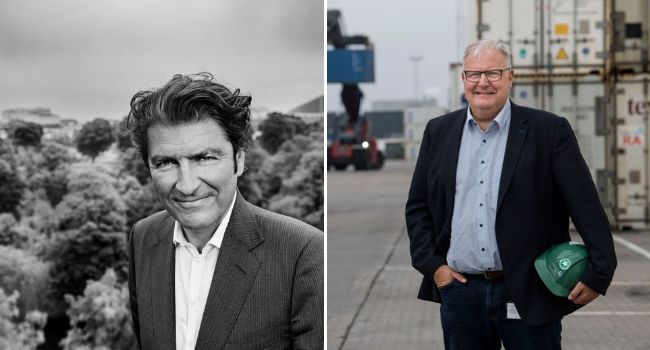 André Rogaczewski, CEO of Netcompany, and Claus Kim Holstein, CEO of Port of Aalborg, have been appointed as new members of the University Board.

Aalborg University (AAU) has appointed André Rogaczewski and Claus Kim Holstein as new external members of the University Board. The two new board members both come with many years of top management experience in the business world and with their unique competences and profiles provide a welcome complement to the rest of the board.

André Rogaczewski is the CEO and co-founder of Netcompany. He was chosen because of his strong competences in innovation and leadership. In addition, he complements the existing board with a background in IT and digitalisation and also brings other experience, including the Danish Disruption Council, to AAU’s Board.

‘AAU is a cornerstone of Denmark's competences and the country’s future in terms of creating the foundation for continued prosperity and growth. I am delighted to be part of the university’s ongoing impressive development. I grew up in Aalborg and I’m a graduate of AAU myself, so I know how important it is that AAU is constantly at the forefront of development and training some of the world's most talented and relevant graduates while also forging close ties to the business community,’ says André Rogaczewski.

In Claus Kim Holstein, AAU gets a board member with strong competences in strategy and organisational development. Claus Kim Holstein is CEO of the Port of Aalborg and thus grounded in the region, but with a view of the world as a whole. His main goal is to create many interesting, well-paid jobs in and around Aalborg that can retain students in the area after graduation.

‘I am proud to now be part of the board team at AAU and approach the task with a sense of humility. I have a special focus on knowledge transfer between AAU and the rest of society, but I also have an eye on the role that AAU must play in relation to the world community. I love and am proud of AAU. Not only of what AAU means for the culture and for me, but also for the amazing results the institution has already achieved, says Claus Kim Holstein.

André Rogaczewski replaces Torben Möger Pedersen who resigned from the board earlier this year. Claus Kim Holstein replaces Grimur Lund whose position on the board ends 31 January 2020.