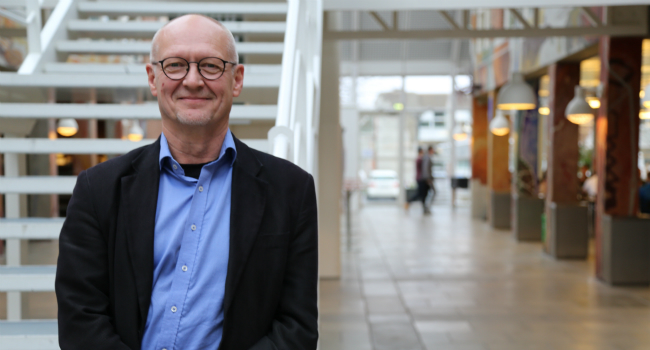 After 40 years at AAU, Børge Lindberg is leaving the Department of Electronic Systems to start a new job at Innovation Fund Denmark.

Counting his studies, Børge Lindberg was at Aalborg University for over 40 years. During that time, he was a student, researcher and associate professor, group leader, section leader and, most recently, Head of Department at the Department of Electronic Systems for nearly 13 years. He has been honoured to be associated with AAU in so many roles, each exciting in its own way.

Børge Lindberg's research area, which he helped to start up along with his colleague Professor Paul Dalsgaard, is speech recognition – an area that Aalborg University is also known for beyond the country's borders.

In 2006, Børge Lindberg became Head of the Department of Electronic Systems. From the beginning, he had a strong focus on the organisation of the department, which at that time consisted of three divisions that ran very independently, almost like three small departments.

Børge Lindberg was thus tasked with creating a stronger organisation and uniting the department.

On 18 December, the department held a farewell reception for Børge Lindberg, where colleagues and partners bid farewell.

Professor Thomas Bak, Vice Head of Department, had already become Acting Head of Department as of 1 December, allowing for an orderly transfer of the management of the department. On 1 January, Børge Lindberg begins his new position as Scientific Officer at Innovation Fund Denmark which will have its headquarters in Aarhus and local offices in Aalborg, Odense and Copenhagen.

‘I’m really looking forward to starting in my new position and expect that it will be very exciting to try something new and different after all my years at the university. And it will also be good for Electronic Systems to have a new leader – I certainly wish that for the department and staff,' says Børge Lindberg.