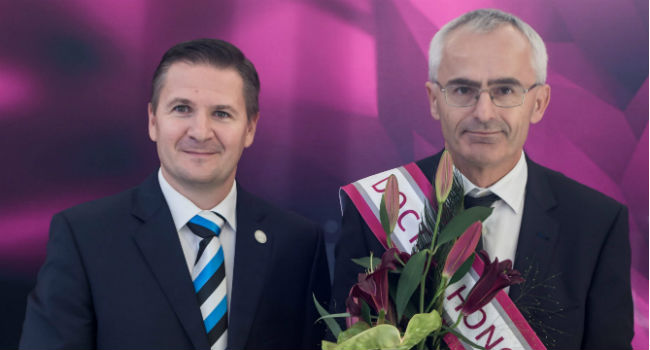 Recently Professor Frede Blaabjerg was awarded an honorary doctorate at Tallinn University of Technology. An honor and a good foundation for future collaboration, he says.

Tallinn University of Technology (Tal Tech) was celebrating its 100 year anniversary last week. The occasion was marked with a major ceremony on where, in addition to speeches, honorary doctorates were awarded. Among the honorees was AAU Professor Frede Blaabjerg who was awarded the honorary doctorate for his outstanding scientific contribution to the field of power electronics.

'By conferring the honorary doctorate on Frede Blaabjerg at Tal Tech we recognize the enormous contribution he has made to the international research environment in the field of power electronics. His contribution is in a class by itself', says Dmitri Vinnikov, Professor at Tal Tech who supported the nomination.

Frede Blaabjerg has already had an advisory role in Tal Tech's research group for power electronics, helping to implement a number of research projects. Dmitri Vinnikov hopes this collaboration will be strengthened in the coming years.

Frede Blaabjerg himself fully appreciates the recognition which is the culmination of a long and valuable collaboration between Aalborg University and Tal Tech where the two universities have partnered on a number of PhD courses, postdoc appointments, joint scientific publications and have even won joint prizes for articles.

'It is a great honor for me to be awarded an honorary doctorate by Tal Tech, an institution that has been a valuable partner for many years. I look forward to continuing our collaboration in the years to come where together we hopefully can deliver results that can utilize the technology toward the goal of creating a more sustainable society', says Frede Blaabjerg.

In the coming years the collaboration will continue between the Department of Energy Technology at Aalborg University and Tal Tech's Department of Electrical Power Engineering and Mechatronics.