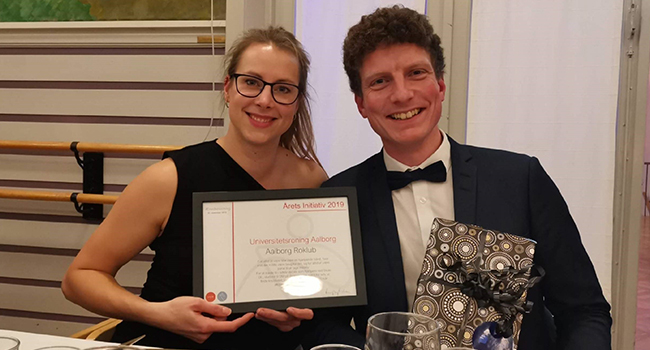 University Rowing Aalborg awarded for their contribution to the Danish Rowing Society!

Every year, the Danish Association of Rowing awards Danish rowers as well as Danish rowing clubs for their achievements during the season that has come to an end. This celebration took place last Saturday, 30 November. As a protector of rowing in Denmark, Her Royal Highness Princess Benedikte was present to present some of the awards

Photo: Kim Tanja Hejselbak Nørgaard (Department of Chemistry and Bioscience) and Simon Staal Nielsen (Department of Energy Technology) at the DFfR Award Night to receive the award for "Initiative of the Year".

Representatives of University Rowing Aalborg were invited as special guests as they were nominated among three rowing clubs for the “Initiative of the Year”. University Rowing Aalborg were nominated, as they are known as a group of people who are always willing to lend a helping hand when needed at the many regattas they participate in every season.

This entails preparation and cleanup before and after regattas, where lanes and bridges are installed on the water and removed again afterwards as well as assisting as starters at the regattas, where one person for each boat is needed to keep the position of the boat in the lane until the start signal kicks of the race. Also, the University rowers were present with 15 people at the Olympic Games for middle school students to help facilitate the fierce competition among the 40 middle school classes which had qualified.

As the headline indicates, the award went to the University Rowers, and it was presented to them by the chairman of the Sports Confederation of Denmark, Niels Nygaard.

The University Rowers received the prize with great appreciation and took further initiative to entertain the crowd with a short speech. Back in Aalborg Rowing Club, the diploma will be displayed as a reminder that good deeds do not go unnoticed and as a motivator to keep up the contribution to the rowing community.