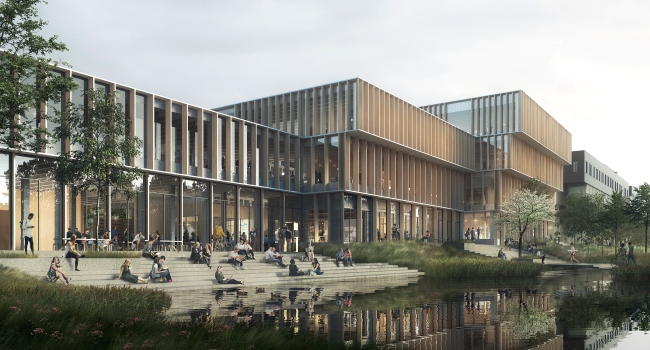 COBE wins the tender for the AAU Science & Innovation Hub

Aalborg University, the Danish Building and Property Agency and the A.P. Møller Foundation have chosen COBE as the lead contractor of the project AAU Science & Innovation Hub. The building will be completed in the beginning of 2022.

In collaboration with Aalborg University and the A.P. Møller and Chastine Mc-Kinney Møller Foundation, the Danish Building and Property Agency has selected COBE, STED and Oluf Jørgensen as the contractors of the new innovation building AAU Science and Innovation Hub.

The AAU Science & Innovation Hub is to become a prominent centre for interdisciplinary research, innovation, entrepreneurship, talent development and business development. The building will include an incubator environment, workshops, laboratories and other such innovative facilities.

AAU Science & Innovation Hub will be built in the area by the new building for the Department of Civil Engineering at Thomas Manns Vej in Aalborg.

Both Aalborg University, the Foundation and the Danish Building and Property Agency were impressed with COBE’s tender for the building that met all expectations.

Five pre-qualified teams tendered for the project. COBE won the tender on the basis of their creative idea and project plan, which convinced all parties that they would be able to complete the project within the time frame, budget and to the required quality standards.

‘We are very pleased that we were able to select a project at such an early stage that matched both our needs and the needs of our client, Aalborg University ,’ says Signe Primdal Lyndrup, deputy director at the Danish Building and Property Agency.

RECTOR: COBE TAPPED INTO SOMETHING QUITE UNIQUE

The Danish Building and Property Agency assessed the bidders’ process descriptions, and the overall concepts were assessed by the Agency and two external consultants, architect Sven Felding and engineer Bo Søgaard, who presented their recommendations to the project steering group, which includes Rector Per Michael Johansen.

‘All five bids were very interesting. COBE, however, tapped into something quite unique that we couldn’t even imagine. The building they’ve envisioned suits its context perfectly, and the spatial organisation of the building is clear and simple and will make it easy to find one's way around. With reference to some of the most successful “garage entrepreneurs” such as Danfoss’ Mads Clausen who founded the global concern in his own garage, their idea of small internal “garages” has in particular struck a chord. We are confident that COBE and their team will be able to engage in dialogue with the users of the building to develop the building of our dreams,’ says Per Michael Johansen.

Henrik Tvarnø, director of the A.P. Møller and Chastine Mc-Kinney Møller Foundation, is also pleased about the project.

‘COBE’s proposal is stringent and suits its location beautifully. It is a friendly and functional building, and we look forward to seeing it when it is completed and in use,’ says Henrik Tvarnø.

At a later stage, the Danish Building and Property Agency will invite tenders for the main contract.

COBE’s project idea and illustrations may be viewed in Campus Services’ building at Myrdalstræde 268.

The total budget for the project is DKK 200 million, and the A.P. Møller and Chastine Mc-Kinney Møller Foundation has donated DKK 100 million. The Danish Building and Property Agency will be the developer and owner of the new building, and Aalborg University will rent and use the building.